Members of the Helper Rams student government paid a visit to the Helper City Council during its recent Thursday evening meeting. Principal Rob Bradley introduced the students and stated that they were in attendance to inform the council of a number of things happening at the school.

First to speak with the Helper Middle School secretary, who expanded upon behavior based plans. There are positive and negative connotations to assist the student body, the secretary explained. Congratulation tickets are given to those that display positive behavior. At the end of the week, there is a drawing for a gift card or other goodies. As the year draws to an end, a big drawing takes place with larger prizes such as speakers.

Green sheets help students to reflect on their negative behavior and notice what was done wrong in order to change the issue. Once so many green sheets are received, a larger behavior packet is given to further assess the negativity. The Helper Middle School historian spoke next ,stating that she loves that student government because it gives her a chance to set a positive influence.

Last to speak was the vice president, who introduced a new way of bringing friendly competition to the school that does not segregate between grades, age or ability. Taking a page out of the Harry Potter novels, the students are sorted into “houses” that are Black, Red and White. A sorting takes place and there are house competitions and points.

At the end of their presentation, the students presented each member of the city council with their own Helper Rams t-shirt. 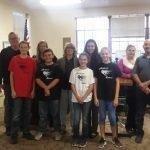 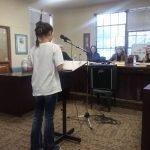 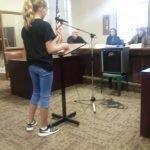 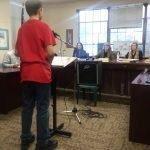 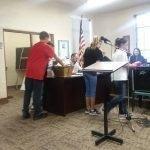 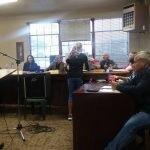