Anne Morgan-Jespersen, the founder of the Helper Project and a well-known local artist, was one of a number of women that were honored at the recent unveiling of the “Utah Women 2020” mural in downtown Salt Lake City (SLC).

The mural, which is 5,000 square feet and spans five stories, graces most of the east side of the Dinwoodey building and is a part of a celebration for Women’s Equality Day. Morgan-Jespersen was chosen to be a part of the mural as she has made a great effort in her art as well as architecture and humanitarian efforts.

“Zions Bank commissioned the public art piece for its Dinwoodey building, 37 West 100 South, in honor of the women’s suffrage milestones that fall in 2020,” Zions Bank shared. “This year marks 100 years since the ratification of voting rights for women and 150 years since Utahn Seraph Young became the first woman in the modern nation to cast a ballot.”

This mural was created by Jann Haworth, who is famously known for her work on The Beatles’ “Sgt. Pepper’s Lonely Hearts Club Band” album cover. Artist Alex Johnstone was also instrumental in the project and created “Utah Women 2020” as a collaborative community project.

“The project began with community-led workshops in which participants were guided in creating stencil portraits from photographic images,” shared Zions Bank. “When the series of in-person workshops, which took place at locations from YWCA Utah in Salt Lake City to Granary Arts in Ephraim, was cut short by the coronavirus pandemic, the mural team created an online tutorial and launched a statewide call to Utahns who were at home and willing to participate. Haworth also enlisted the help of national and international artists, most of whom were on lockdown at the time, to compose 24 additional portraits. In total, more than 175 artists contributed to the mural.”

According to Zions Bank, Haworth and Johnstone photographed the painted stencil portraits, then sized and digitally arranged the images into a collage, which was printed on nine 10-by-55-foot vinyl mesh banners.

“This mural is for me, the most extraordinary of my career because of the arc of time during which it is being made,” Haworth said. “I believe that this gives it another level of historical significance that is a tribute to the 200-plus people who made the mural.”

Creators and backers of the mural said that the most difficult task was choosing which women to include in the mural and which to leave out. “The 250 individuals depicted on the mural were selected through a democratic process, reflecting a diversity of characters and contributions,” Zions Bank shared. “Two faces were intentionally left blank to allow observers to place the faces of women important to them, or themselves, in the mural.”

Downtown SLC is even more significant to Morgan-Jespersen as there is a statue erected of her great grandfather, John H. Morgan, on the city’s Main Street. He was the founder of the first business college in Utah. 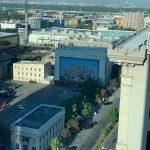 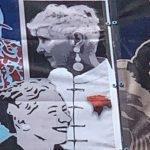 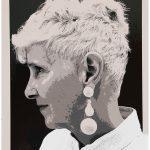 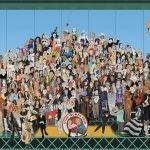