Thomas Elmo Williams, a well-known and revered artist and resident of Helper City, is spreading more beauty in the city with a completed painting on a building located on the city’s Main Street.

The Matt Warner Chapter E. Clampus Vitus building, located next to the Western Mining and Railroad Museum, was graced with Williams’ expertise as he donned the building with a mural of a miner of times passed.

The ongoing restoration of the building has been reported as nearly finished, with the next step including raising funds for a new neon sign. John Magnuson stated that the building looks as it did in the 1930s with the recent renovations, which is the earliest photo of the building that could be found by the clampers. He continued by expressing that the sign is also represented in the photo and the purchase of the new sign would be an accurate historical representation.

The cost of the sign is listed as $5,969.51 and the Helper Project has agreed to pay half as part of its ongoing Main Street renovation project. Those that wish to make a donation to the project may do so by clicking here. 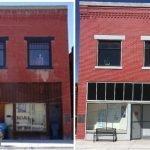