A concerned citizen called ECSO 911 shortly before midnight Wednesday night reporting an erratic driver. The caller stated that he had been traveling behind the vehicle on SR10 from Ferron to Castle Dale. The caller reported that the vehicle was all over the road and had actually driven onto the sidewalk in front of Zions Bank in Castle Dale. Two ECSO deputies responded. The vehicle was pulled over on Main Street in Huntington. As one deputy was talking to the driver, he asked the driver to unbuckle his seat belt, which he did. The deputy then opened the driver’s side door and asked the driver to exit the vehicle. At this point, the driver put the vehicle in drive and took off northbound. A high speed chase ensued.

While the high speed chase was taking place on the 20-mile stretch of SR10 between Huntington and Price, officers with Carbon County Sheriff’s Office, Price City Police and UHP were preparing to deploy spikes at various locations. The first set of spikes at MP 63.5 on damaged the vehicle’s front tires, causing it to slow. Spikes were also deployed at 3000 South Carbon Avenue in Price and at the intersection of Carbon Avenue and Fairgrounds Road. The vehicle still refused to stop and was weaving into oncoming traffic. With no front tires left, the suspect vehicle then entered SR6 eastbound. An Emery County deputy tried to get alongside the vehicle, but the vehicle accelerated again and the suspect driver was having a hard time remaining in control of the vehicle.

The vehicle was then traveling in the wrong lane on Price Main Street and was close to striking several vehicles at the Auto Farm dealership. At this point, the deputy believed it was clear that the driver was not going to stop the vehicle and the danger to the public was reaching a high level as they were entering the city.

As the two deputies approached the vehicle, the tires were still spinning and the subject was still trying to get away. Law enforcement personnel from other agencies arrived on scene and assisted in removing the suspect from the vehicle, where he was cuffed and searched. He was identified as 27-year-old Skyler Montag from Ferron. Montag was transported to Carbon County Jail for holding, and shortly thereafter was transported to Castleview Hospital to be medically cleared.

Montag was booked into the Emery County Jail on preliminary charges of fleeing, DUI, 2 counts of possession of a weapon by an intoxicated person, reckless driving, driving on suspension and resisting arrest. The investigation is ongoing and Montag could face additional charges. 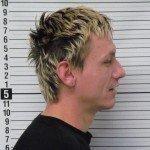 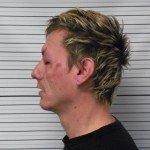 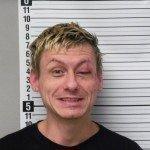