A Price couple is lucky to be alive after the driver crashed a vehicle in an attempt to evade law enforcement. On Sept. 11, around 10 p.m., a Price City Police Officer attempted to make a traffic stop in North Price for a minor traffic offense. The vehicle, driven by Nathan Ron Giles, 24, failed to stop and led officers and deputies on two separate high-speed pursuits throughout Carbon County.

The initial pursuit was terminated after about six minutes due to multiple safety concerns for all those involved. Around 11:10 p.m., the vehicle was found by Price City Police and the vehicle again failed to stop for officers.

The vehicle led officers on another pursuit through Carbon County, eventually making its way into Carbonville where officers pursued at a distance due to the residential neighborhoods and safety for those in the area. The fleeing vehicle missed a turn and crashed into a fence before wrecking into the canal off 2250 North and Pitts Road. The suspect fled on foot, leaving the passenger trapped in the vehicle.

Responding officers were able to remove the passenger from the vehicle, which had started to take on water. The fleeing suspect was eventually located near the crash site and taken into custody without incident. The driver and passenger were both evaluated medically with no reported injuries. 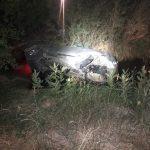 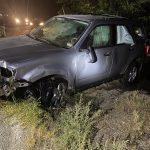