Utah Highway Patrol released the names of motorists involved in the fatal auto accident that occurred Friday night. Gregory D. Leavitt, 34 of Pleasant Grove was the driver of the 2000 Acura that veered into oncoming traffic. Leavitt was pronounced dead at the scene.

The driver of the semi, David Lewis of Orem, was transported to Utah Valley Regional Medical Center with non-life threatening injuries and has been released.

Travelers from or to Colorado can use I-70.

UPDATE: The impact of the crash caused the semi truck cab to catch fire. Spanish Fork fire responded and put the fire out.

The driver of the semi was transported to Utah Valley Regional Medical Center with non-life threatening injuries.

One person is dead after driving his vehicle directly into the path of a semitruck coming down Spanish Fork Canyon on Friday night.

Utah Highway Patrol troopers are investigating the crash, which happened at 6:55 p.m. and resulted in the closure of state Route 6 at the mouth of Spanish Fork Canyon.

The impact of the crash caused the semitruck, hauling two coal trailers, to jackknife and sent the two trailers onto their sides, spilling coal all over the road.

A fire briefly resulted, but didn’t last, and as of 7:45, both the truck and the car were smoldering. The road is expected to be closed for hours.

The car that struck the semi was headed east toward the canyon and for a yet-unknown reason, drove directly into the path of the westbound semi. The driver, who appears to be the only occupant of the car, was ejected and was pronounced dead at the scene.

The driver’s name will not be released until next of kin has been notified.

The driver of the semi was transported to a local hospital. 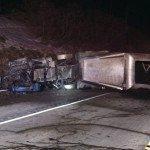 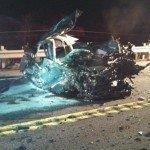