Representatives from Public Land Solutions were met by a room full of concerned citizens Tuesday afternoon at a workshop aimed to consider recreational possibilities found within Nine Mile Canyon and the surrounding area.

Ashley Korenblat and Katie Ross represented the company, which is a non-profit organization aimed at increasing the economic value of recreational areas through land use plans and business plans. The institution has also worked with other projects in the past and is working alongside the Bureau of Land Management’s “Connecting with Communities” program currently to discover recreational possibilities in the Nine Mile Canyon Special Recreation Management Area, according to information received at the event.

“We’re looking for the magic opportunities,” Korenblat said at the beginning of the meeting, talking of the company’s desire to find possibilities for recreation that work with both recreation desires and private interests.

“The main point at this point is that nothing is decided,” Korenblat said.

Starting with the issue of non-motorized transportation, Korenblat walked attendees through various areas and maps of the Nine Mile Canyon area in an effort to find any areas to possibly use as part of a trail system.

Many of those in attendance took the opportunity to voice their concerns over a lack of law enforcement in the area as well as little direction for visitors to the area, the latter often leading to individuals trespassing on private property.

In mentioning areas such as Pete’s Canyon, Daddy Canyon, Minnie Maud, Nutter Ranch and others, the public responded in a variety of means, with some landowners remaining vigilant that no trails be placed on their property and others finding possibilities for such trails.

The topic of motorized tourism was also discussed at the meeting, with the possibility being mentioned of making the canyon an entirely motorized attraction with a system in place of driving to a sight and moving on to the next one.

Korenblat expressed the view of capitalizing on the area as much as possible and bringing tourists to it to stay for a number of days.

Community members involved in the process of OHV and ATV tourism spoke passionately about several areas found near the canyon, mentioning the Badlands and current projects in place to enhance the experience found therein.

Horse Bench was also mentioned as a possible attraction, but the conversation quickly changed to a discussion on measures in place that currently restrict access to the area.

“This is a prime loop,” said Joan Powell, who serves as both Wellington City Mayor and member of the Castle Country OHV Association, in hopes of finding a way to open the area. “This is a selling point for bringing OHV people into this area.”

After the discussion on motorized recreation, a short intermission took place, after which, the session resumed. The subject of rock climbing in nine mile was touched on for a short time due to climbers believing that the rocks in the area crumble too easily for it to be safe. Once that was decided, the subject changed to the campground.

The ranch and campground in Nine Mile is owned and operated by the Mead family, who were in attendance at the family. One member of the Mead family stated that they receive calls often from patrons that wish to see the rock art and do an all-day hike. This is beneficial to them, because afterward they are able to arrive back at the campground and have a place to sleep for the night.

The Mead family also informed all that they have had horses come and stay with patrons in the past. Corrals are available at the ranch for the horses to stay in and patrons are able to provide their own hay. When the question of being able to ride said horse from the campground to a place of destination, the Mead family stated that most know beforehand that the horses will most likely need to be loaded into a trailer and driven to a trail first.

One attendee spoke then, stating that he believes that the BLM should first look at the one vendor available in the canyon before thinking of bringing in anything new. The audience then informed the PLS representative that Carbon County Recreation also provides tours of the canyon. This impressed the representative greatly, who stated that most counties do not do such an activity.

Going more in depth, the subject was then turned to the cows. This was due to the fact that the BLM would like to ensure that they don’t encroach on the territory the cows are used to aside from grazing allotment and private land. One patron informed that the cows are usually at the south end during the summer and fall, whereas during winter and spring they’re located more at the north end.

For the closure of the meeting, one attendee asked what the next step would be. He questioned the time-frame and whether the group planned to come back with more information for the public. The crowd was informed that all of the information obtained will be provided to the BLM who will then conduct a normal EA process and open another opportunity for public comment. An exact time-frame isn’t set yet, but the vision will be within the next few months. 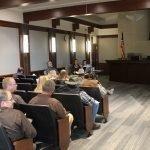 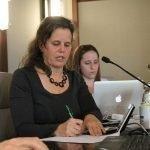 Ashely Korenblat, Public Land Solutions, takes notes about the Nine Mile Canyon area as one of the public addresses their concerns.