The Emery County Historical Society hosted a Veterans day program on Thursday evening at the Museum of the San Rafael.

The program began with the audience singing “The Star Spangled Banner.” Suzanne Anderson thanked everyone for coming on the trek to The Box. She announced another trek they will be having in April for those who missed. There will be no monthly December meeting for the historical society because of everyone’s busy schedules during the holiday season. On January 28 at 6:30 p.m., the society will have its annual antique roadshow at Miller’s Landing in Huntington.

Anderson made a quilt and donated it to the Quilts of Valor for wounded warriors.

“A friend and I had a quilting magazine and a lady wanted to team up people who only pieced tops,” Hazel Mclummin said. “She thought every wounded soldier should have a quilt, and that’s where it started for us. We signed up and quilt tops came to us from different states for people who didn’t have quilting machines. We would quilt, bound, wash and put labels on the back. Then we sent an email to the organization and they would send a destination to where they wanted them sent. The quilts have been sent anywhere from North Dakota to Afghanistan, and the Price hospital (Castleview) has paid for all of the shipping.”

Roxanne Jensen then presented the speaker for the evening, her younger brother Rex Randall. He grew up in Elmo, and graduated from high school in 1988. He joined the Utah National Guard on April 16, 1987 and got married to Lydia Guzman in 1990. Randall showed a video of him in Iraq. He now has up to five uniform changes in his military career. Around 2010 he was eligible to retire but went to Afghanistan instead. In August, he will be retiring after 29 years of service to his country.

“I have served some of the finest people I know, but I look forward to going back to school and being a student once I retire,” he said. 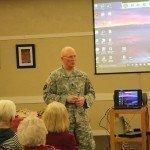 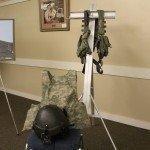 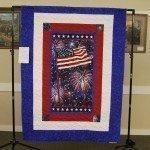 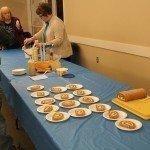