On Veterans Day Eve, Nov. 10, the Emery County Historical Society honored veterans by having Vietnam veteran Lee Jeffs speak to them about his tour of duty as well as his opportunity to attend an Honor Flight to Washington D.C.

The evening was introduced by Edward Geary. Following the Pledge of Allegiance and a prayer, Lee was invited to present. He began by stating that he was drafted in July of 1966 and conducted his training at various Army posts for one year. In July of 1967, he boarded a boat in San Francisco, destined for a year of duty in Vietnam.

Jeffs’ son Tyler showed photos of his father during his explanation of his duties as a machine gunner of an Armored Personnel Carrier. Jeffs told about his near death experiences, living in a fox hole, jungle snake attacks and finally of his release. His return to the United States was less than appreciative and respectful, as was the case with many of those who served in Vietnam.

Then, last May, Jeffs was given the opportunity to attend an Honor Flight with 50 other Vietnam veterans. The flight was from Salt Lake City to Washington D.C. His oldest son, Tyler, was his escort on this memorable flight.

Tyler explained many of the activities of the flight. While there, they were able to visit various war memorials. Lee found the names of one of his friends, Jimmy McBroom, from Emery who gave his life for his country, and another who was missing in action. The flight was just overnight, but on the return home, Jeffs was given a hero’s welcome, which helped numb the sorrow from the first experience.

A display allowed the many guests at the event the chance to look at pictures and memorabilia from Jeffs’ service to the country. 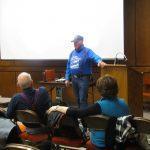 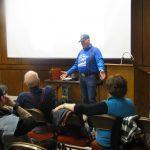 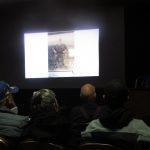