Pictured: A student talks with judges about his exhibit during the History Fair last March.

For many students history was always something they had to take in school, not something they really wanted to endure. But the times are changing as new ways to teach history help students to learn more than just dates and places.

One of the biggest events of the year in Carbon School District is the Castle Country Regional History Fair which this year will be held on March 16, 2018. At the fair students do one of many kinds of projects which they have already begun working on for the competition next spring.

“Students compete in five different categories,” said Chris Sweeney who heads up the history fair for the region and is also a teacher at Carbon High.  “They can do historical papers, design a website, a documentary, a performance (where they write a script and build all the props for it, as well as perform it) or build an exhibit.”

As regional director, Sweeney works to help students in Carbon and Emery County, including home schooled students to be a part of the fair. While the program has not been running for a long time in much of Utah, the idea for the fair blossomed in 1980 and the national organization is run out of College Park Maryland. Presently the state program in Utah is run by the Utah Division of State History. For Sweeney the regional history fair is still a a work in progress.

“We have a very good contingent from Carbon County and we want to build up Emery and get them involved more,” he said.

In the past few years the program has been growing ever larger in Carbon County. Last year the program was big with displays covering the gym in the school and presentations going on all day by participants in other areas of Carbon High School.

“We started with about 500 students doing projects in September of last year and 350 finished theirs,” said Sweeney. “We had students that participated in grades 4-12. The primary division includes grades 4 and 5, then there is the junior and senior divisions that run from 6th through 12th grades. The primary grade participants can only go to the regional competition,  while those from the junior and senior divisions can move all the way onto nationals.”

In between, for those students in the upper divisions who win region, there is a state competition. The Castle Country Region has done well there over the years and students can qualify for nationals when at state.

“We have had a very good record on going to nationals,” he said. “We have had at least one student go for each of the last six years,” he stated. “Last year we had 59 kids go to state and three projects qualified for nationals.”

He says that the area does produce some great documentaries and performances. Last year a group, consisting of Mersedez Clifford, Katie Snow, Tyler Pierce, Bethany Prettyman, and Tessa Atwood, did an outstanding performance project in Maryland that garnered them the George Washington Leadership in History Award. That award is sponsored by Mount Vernon, the previous home of George Washington that has been owned by the Mount Vernon Ladies’ Association since 1859. That same group from Carbon did another performance the year before, a skit which was also highly regarded at the state and national levels.

“During the 2016 competition five students from Carbon did a performance based on William Shakespeare’s life,” said Sweeney. “This past year (2017) a similar group of students did a performance based on the Culper Spy Ring, a band of patriots which was named by George Washington and were recruited to collect information about troops, ships and other important intelligence in the New York City area during the Revolutionary War.”

Each year the projects have to address a theme that is sent out to everyone who participates nationally. Last year it was “Taking a stand.” The competition for this year has the theme of “conflict and compromise.”

The idea of the fair and the projects students do in conjunction with it has changed a lot of minds about the importance of learning about history and how it should be regarded. Even parents see the value more.

“Parents come to me and often tell me how they didn’t like history in school,” says Sweeney. “But then they say ‘but now you can set me in front of a documentary on The History Channel and I love it.’ I think today we are more hands on about teaching history than we used to be. The educational process involved in the fair is that the students get to do research. While everything is at their fingertips in terms of information now, we stress primary research where they go out and interview someone. That also teaches them the difference between a primary source and a secondary source. We are teaching them to dig deeper.”

In the process involved students have to prepare an argument about the subject they choose and it has to meet the theme for the year. In the end they have to take a stand and argue for their viewpoint in front of a judge or in their paper. There are two sides and they must show the opposition to things as well as their point of view.

“It’s very neat when you are able to teach them about both sides and they see that they need to do that,” he said. “Students are able to make connections between people and events. They are figuring out how what they are learning is going to have more meaning to them. This helps them to watch the news a little bit more so that they pay attention to what is going on in the community. They realize that someday they are going to get out of school and that the real world is coming.They know that it is going to hit them square in the face and so it helps them to learn a little bit more about it and how to be prepared for it. As a teacher you can see the attitude change as that mental switch flips as each student starts to observe what is going on in the world around them rather than just seeing what is happening in their small social circle.”

One thing the fair does is to prepare them for college. All the things they need to do for the fair are necessary for college today. In the history fair plagiarism is not just words or phrases, but also ideas. What they produce may only seem like high school projects but the scrutiny to be accurate and to cite sources is there.

“We tell them that when you take a word, a passage or an idea from someone else, you must credit the source,” he said. “I just tell them when in doubt, give them credit. You can never go wrong that way. The reality is that these kids projects could go onto nationals and their pieces could be published.”

Sweeney says the recent emphasis on ‘fake news’ has changed the dynamics of students doing projects. They often have a lot of questions about sources and even about what the truth of something is.

“It really is one of the biggest things we have to deal with,” he stated. “We need to guide these students into finding as many sources as possible, with reliable, quality content. We get the questions all the time. They often ask me what I think about it or if I am of one party or another. I tell them that I won’t let them know because I want them to develop their thoughts about that on their own. I tell them to develop their own opinions and not those of someone else. I am not going to give them my bias.”

Probably one of the best things about doing a fair project is that students get to pick something they are interested in. There are few restrictions on what they can research.

“I hope that doing a project that is based on their own interests will inspire them to do more with history,” said Sweeney. “We want that project to take history in a new direction for them to a place where it has never taken them before. What they do for the history fair is very different from other kinds of things they do. I want them to not think of it as a fair or an event, but that they are historians and they are doing research as a goal.”

The work and the projects also outline a good process for what is being done in education today. The reading and writing skills it takes to develop a project and learning to analyze and use critical thinking skills to solve situations and problems is most important as they move through their lives.

“From an education viewpoint there is no better way to teach them those things,” concluded Sweeney. 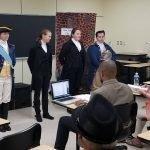