Eight teams competed to help GIVE CANCER THE BOOT. Competitors raised nearly $200 for the CNS Relay for Life team between entry fees and ringer quarter buckets. Prizes were awarded in place of cash pots.

“It was a small turnout due to so many activities going on in the area but the weather couldn’t have been more perfect,” event organizer Rochelle Badback said.

Brandon Sanderson and Rhett Popejoy finished the tournament on top followed by Matt Williams and Kenny Blake in second place. Clinton “Chief” Badback and Raymond Lofely rounded out the tournament in third.

Next up for the Carbon County Horseshoe Crew is the Third Annual All-Nighter Lunatic Doubles Horseshoe Tournament on Friday, June 17th at Washington Park. This is in conjunction with other activities in the park such as the Lunatic Triathlon and the TGIF in the Park. Tournament registration begins at 9 p.m. and the tournament will start at 10 p.m. The cost is $20 per person with cash pots awarded to the top three teams. 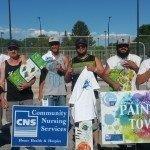