Local horseshoe enthusiasts participated in the first ever Midnight Madness Doubles Horseshoe Tournament on Friday. The event was conducted in conjunction with the Lunatic Triathlon and was organized by CCR Horseshoe League Chairperson Rochelle Badback.

“With all the excitement the triathlon brings to the park under a full moon, I decided to organize an event for local horseshoe players,” Badback explained. “It brought out 10 teams from Carbon and Emery counties.”

The double elimination tournament began at 10 p.m. and ran until 1 a.m. Badback feels that the event was a success and she plans to host the event again next year. 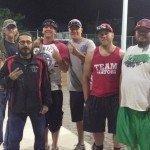 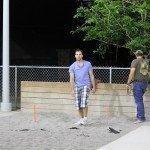