In conjunction with the Carbon County Fair, 23 individuals participated in a singles horseshoe tournament while 16 teams competed in a doubles competition on Saturday.

According to tournament organizer Rochelle Badback, the event was a huge success. “Thanks to Rhonda Peterson and all the workers for setting up the pits and allowing us to host a tournament at the fair,” Badback stated.

First place winner of the singles tournament was Ricky Neil Sandoval followed by Clinton “Chief” Badback in second and Carlos Sandoval, who finished in third place. 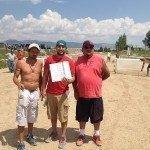 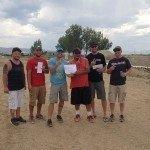