Horseshoe enthusiasts gathered on Saturday to take part in a tournament at Community Daze in East Carbon. The competition featured a singles tournament as well as a doubles event.

In the doubles competition, 25 teams picked up their horseshoes to compete. Rhett Popejoy and Ryan Olsen finished on top followed by Randi and Matt Williams. Ricky Neil and Aaron Sandoval ended the tournament in third. 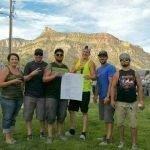 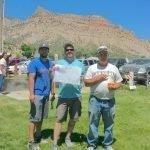