Price native Wyatt Howard won the Saturday night IMCA Modified featured main event race at Desert Thunder Raceway on July 25. Nine drivers competed for a $1,000 grand prize sponsored by Castleview Hospital. Howard pulled ahead of the leaders midway through the race and finished ahead of the pack.

“The win feels amazing. Everything just fell into place and it feels great to be able to show all the hard work paying its dues,” Howard said. “The modified class is probably the most frustrating class on the planet, from trying to work with the rules and keep the right setup for what we’re competing with each and every night.”

Howard, age 26, made his racing debut in 2010 at the age of 14. The third-generation dirt track racer comes from a family with a vibrant and interesting racing history. His father, Harvey Howard, owned and operated Desert Thunder Raceway from 2000 to 2020.

“Howards just seem to have a hair for competition and Desert Thunder has always been my home,” Howard said.

“I’m glad someone has been able to save the track from being cleaned off the map. I couldn’t begin to say how thankful me and the rest of the Howard family are to the Weybrights for carrying on our legacy of Desert Thunder,” he said. “They are keeping the place we called home for so many years a place that we can continue to support and retreat to whenever needed.”

While he is currently racing in the IMCA Modified class, Howard also competed in IMCA late models in different series and races across the country.

“I love the competitiveness of racing night in and night out against the some of the same as well as different drivers every week,” Howard said. “I also love the family and friends I’ve had the honor of meeting and building at the track and just straight up having fun with it all separate from all the competition.”

When Howard isn’t racing, he can be found hunting and fishing in the Eastern Utah wilderness. 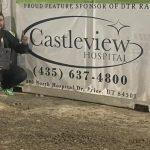 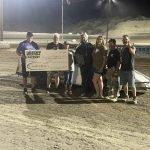