Throughout the world, there are four million students who compete in geography bees each year. On Tuesday at Huntington Elementary, they found a student for the state competition. The national champion wins a $50,000 scholarship and a prize trip from National Geographic.

The judges were Gary Arrington and Kathy Cowley. In the final round, the questions were about the United States and students had 15 seconds to answer orally. Students also wrote some of their answers on a white board that was provided. Once the 15 seconds were up, the students showed the judges their answers, then one by one read them aloud.

The winner of the Huntington Elementary Geography Bee was Addie Miller. Ty Guymon came in second and Sean Rogers was third place. The state bee will be held April 1 and the National Geographic Geography Bee will be May 22-25 in Washington D.C.

“I appreciate how hard our students worked to participate in the 2016 geography bee,” commented Huntington Elementary Principal Garth Johnson.

The competition included students from grades fourth through eighth. In each of the classrooms, students competed to determine two winners. Then, those students were able to be in the competition on Wednesday.

Huntington Elementary did a primary grade geography bee to help the younger students get used to studying geography. The winners were Braxton Butler and Chase Hanson. 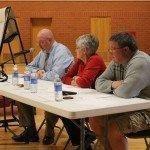 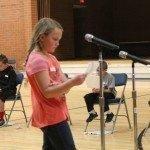 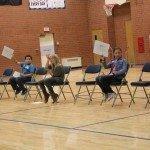 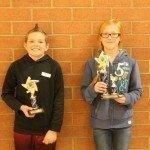