Principal Jody Carter welcomed the Emery School Board to Huntington Elementary on Wednesday for the board’s March meeting. All board members and district supervisors, along with Emery School District Superintendent Ryan Maughan and Business Administrator Jackie Allred, were in attendance.

Following a work meeting at 6:30 p.m., Board President Tracey Johnson called the meeting to order. The school fees policy was then presented with one minor change to the high school spending plan. This was the second chance for public review; however, there were no comments from the audience. The school fees were later approved by the board during the action items portion of the agenda.

The principal report was then given by Carter. She expressed that the school’s main concern is attendance, not just for COVID, but other health concerns. Principal Carter has been able, through ESSER funding, to provide three-hour positions to afternoon schedules to assist students with many absences. Intervention schedules are occurring every six weeks to allow teachers time to meet with resource teachers to consider at-risk students.

Carter also reported that the art/music specialist has been very positive as it gives teachers planning time and the students look forward to it. In addition, the community council at the school is hoping to acquire funds to hire a physical education specialist next year. Funds received from donations have been split between teachers to help with curriculum materials. To conclude, it was announced that Huntington Elementary has devised a new reading incentive program.

Following Mrs. Carter’s report, Emery School District Elementary Supervisor J.R. Jones took the opportunity to recognize her for her devotion to the school, staff and students. “She does a fabulous job with a large school,” he said.

Next, Maughan expressed the district’s sympathy in the passing of Vicky Nielsen and LaRae Majors, stating that many students benefited from them. He also thanked Kevin Hurst, the director of student services at USU Eastern, for his efforts within the community. The superintendent then announced a District Development Professional Day on March 14.

During the public comment period of the meeting, Hurst expressed his appreciation to the district for the conversation that aligned goals between the university and the district. He emphasized that the university wants to be a working partner with the Emery School District. 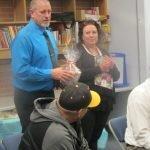 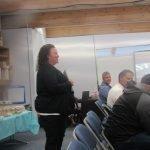 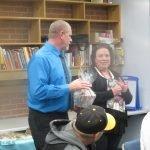