Visit the Carbon School District administrative offices at dusk and there is a high chance that you’ll be greeted by the clatter of metal poles smacking and the full vocals of Cynthia Erivo. Stay a minute longer and you might be lucky enough to witness a “full run,” or the entirety of the Carbon High Winter Guard’s show. It is truly something to see.

Winter guard is an artistic performative sport and a branch of the color guard, a group that performs with the marching band during the fall. Using flags and wooden “rifles,” the guard utilizes music and their equipment to tell a story.

The practices you were witness to are a large part of these students’ lives; practices range from 10-12 hours per week, segmented into three-day chunks to accommodate for the members’ varied responsibilities. Then, there are the weekly exhibitions during the month of February and the virtual competition submissions to be sent in, the most recent of which took place on Feb. 20. Those results arrived on the 22nd.

There are 27 competing schools in Carbon’s division. The team placed third.

The Carbon High winter guard is infantile, having just been created in the 2020-2021 school year. Since the introduction of Maria Rivas, a Riverton High School graduate and experienced guard member, as the color guard coach during the marching band season, Carbon’s color guard team has performed tirelessly and outstandingly.

The winter guard season began in the first week of December. According to Rivas, “Winter guard was integrated into the school because we wanted to give the students more of an opportunity to experience the color guard community.” Under the leadership of Rivas, and with the assistance of Chris Sweeney as a coordinator, the team developed a show based around the story of Harriet Tubman titled, “Farewell.”

The team’s first competition video was submitted on Feb. 6. This being Carbon High’s first winter guard competition ever, the team was striving just to be as close to 15th place as possible. There were 26 competing schools and Carbon placed eighth.

This absolute victory, and the much greater one on the 20th, showcases the winter guard’s very apparent ability to supersede expectations. Endless practices and skillful leadership have allowed the guard to flourish and become one of the best in their division.

Cindi Rukavina, a new teacher at Carbon, stated, “I watched a recording of the winter guard performance and it gave me chills. I have seen all of the hard work and dedication of the performers and the coaches. The story being told is so powerful.”

Echoing Mrs. Ruckavina’s words was Emily Parry, one of the team’s student captains, who said, “As a captain and leader of the Carbon High color guard for the past three years, I have become exceptionally proud of how much work and effort that my teammates and I have put in. We have had rough spots, but this year, we are really putting our name out there and we are being recognized for who we are and the blood, sweat and tears that we have put into this program. I am extremely proud of how far we have come.”

One of the most powerful phrases in the music that accompanies the guard’s performance is as follows: “I go to prepare a place for you.” Surely, this year’s winter guard has, and will continue, to fulfill this promise to all who come after them. 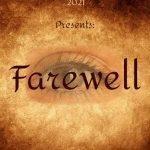 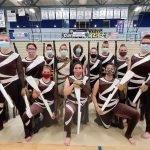 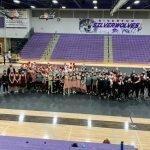 Carbon High’s Winter Guard poses with other guards at their Feb. 20 exhibition. 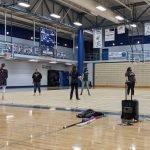 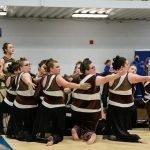