The first order of business for the Emery School Board at their meeting on March 31 at Cleveland Elementary was the approval of a requested tax incentive rate for three businesses.

Hornshadow Solar and Green River Solar were both approved with a 40% incentive rate for 20 years. The Huntington Commercial Corridor was approved at a 75% incentive rate. This rate will be reassessed in five years depending on the occupancy rate at the resort and be renewed at 75%, 50% or 25% for five-year periods not to exceed 20 years overall.

The graduation requirements policy was then approved unanimously by the board. This will become effective in 2023 and will increase CTE requirements by one, but will also decrease elective credits by one to offset the increase. The school fee schedules policy was also approved by all board members present. This action comes after two public hearings and would set a maximum fee at $5,000 per student.

Cleveland Elementary Principal Jenny Gagon then thanked the board for its continued support and gave a report on her school. She explained that the school’s theme for this year is “Kindness and Growth.” Her presentation also demonstrated the learning gap from last year’s closure in response to the COVID-19 pandemic as well as social areas.

Gagon stated that they feel that reading is the base for all learning, which lead them to start an after school tutoring program to help in these areas. Cleveland Elementary was recognized by Lexia Reading as a top school based on nationwide results.

She also showed some of their social-emotional programs and three students spoke to the board about the role it is playing in their school. Emery School Board Vice President Marie Johnson commented that she always feels a warm and cohesive atmosphere at Cleveland Elementary.

Superintendent Jared Black’s report was read by Vice President Johnson as he was unable to attend the meeting. Shelley Rowley was recognized as UCET Innovative Teacher, Thomas Hughes as the 1A coach of the year and Katie Hreinson was named Utah High School Athletic Association female official of the year.

Superintendent Black also reported that the RISE Testing window is from March 16 to May 15. COVID-19 numbers are down, with no adults cases in the district at the present time. However, mask wearing will remain a requirement in K-12 grades.

To conclude, JR Jones and Yvonne Jensen presented projected student enrollments for the 2021-22 school year. Elementary schools are estimated to drop in numbers by 44, with Book Cliff and Cottonwood Elementary maintaining while other enrollments have dropped from nine to 12 students each. Secondary schools will increase a total of 16 with fluctuations between schools. Emery High School is projected to gain 45 students with the influx of students from the middle schools. 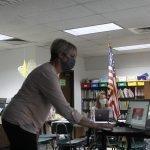 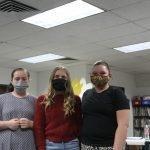