It has certainly been a fun spring season for Emery County’s 12U baseball team. Emery has played teams from throughout the region and worked its way to an undefeated season. Teams in the league include Carbon, Delta, Fusion, Gunnison, Richfield (2) and South Sevier.

The crew went 14-0 in the regular season and has added a few tournament championships on top of that, including the league tournament. In 25 total games, Emery remains unblemished with just one tournament to go.

“We didn’t really have any expectations except try to get better, improve on last year,” said head coach Aric Olsen. In addition, Olsen was quick to mention that the success of the team falls on the young men’s shoulders. “The boys don’t just come to practice… it’s the off-practice days where they are doing extra work. To me, that’s how they’ve become good baseball players. They are just putting in extra work, at home, in the yard, at the park with their friends.”

The team consists of Maddex Tanney, Garrett Conover, Bronx Olsen, Trygg Jensen, Brek Griffin, Gideon Mecham, Ben Johansen, Ajay Thomas, Crew Behling and Easton Stoker. Three of those players are new, while the others have been playing together since they were eight.

“We have a team full of standouts, 1-10, it’s a tough lineup to pitch to, all of them. They all do their part,” added Olsen. “It’s nice to see them challenged and raise to the occasion.”

One of the 10 broke his leg a couple weeks into the year, so the remaining nine have had to step up and play every inning. This past weekend, Emery was in Richfield where it won the first two games on Friday to claim the number one seed in the tournament. After a first-round bye, Emery blow through the quarterfinals, semifinals and championship game to bring home a ring and remain perfect.

The team has one more hurdle to complete as it heads to Nephi for the final tournament.  “We want to thank our sponsors: Conover Ranch, SideTrax, J&T, Castle Valley Supply, JN Auto, Parts City Huntington and Sinbad Construction for allowing us these great opportunities.” Olsen concluded, “we hope to finish strong.” 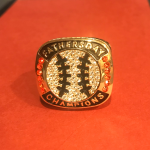 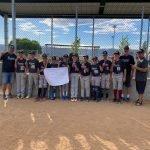