Pictured: Details of the project and affected lanes at the intersection of 100 North and Carbon Avenue (above) and on the 100 North overpass (below). Renderings courtesy of UDOT.

With winter around the corner, the season afterward of road construction may bring changes to Price City in more ways than one.

One of the major projects facing Price City next summer, or “road construction season,” will be a resurfacing of SR 55 from 100 North and Highway six along 100 North, down 300 East and then from Main Street to the highway again.

During the process of restriping the road, UDOT and Price City have proposed the possible addition of new bike lanes from highway six, along 100 North, to 300 East.

The proposed lanes would occupy both the north and south side of the street and measure four feet wide. 100 North would still accommodate lane travel in both directions as well as turn mediums in designated areas.

The project, however, would come at the expense of removing any on-street parking found along 100 North at the present time.

To receive input about the project, business and property owners along 100 North have been notified about the possible change. Also, a public open house will be hosted Wednesday, Nov. 16, from 5-7 p.m. at Price’s City Hall on 185 East Main Street.

Those with questions, concerns or feedback on the issue are encouraged to attend the open house or speak with Price City Engineer Russell Seeley by calling Seeley at (435) 637-5010. 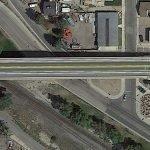