As the 2022 International Days celebration draws near, the committee behind the fun met on Tuesday afternoon to discuss the finer details of the event.

Price City Councilman Layne Miller stated that he had spoken with the Castle Valley Center that morning, which is where the Jr. Grand Marshal of the International Days parade is chosen from each year. One teacher in particular had a number of students in mind and informed Miller that she would have a decision soon.

In terms of the movies that are hosted in the evenings in Pioneer Park, it was stated that there is usually one animated film and one non-animated. The committee was presented with “Encanto,” “Sing 2” or “Sonic the Hedgehog” for the children’s movies. “Encanto” was the most voted for.

For the non-animated films, the options were “Spiderman,” “Eternals,” “Jungle Cruise” or “Clifford the Big Red Dog.” The popular vote was determined to be “Spiderman: No Way Home.”

At this time, 19 vendor booths have been reserved and it was stated that for this particular time of the year, that is pretty close to being average. A reminder was then given that the kids’ parade will begin 15 minutes later this year to give the booths at Kids’ Day the proper set-up time. The parade will begin at 9:45 a.m. that Saturday, with Kids’ Day beginning at 10 a.m.

The yearly firework show may not take place this year due to the drought. The committee made the decision to play it by ear to see if it would be possible and make an official announcement at a later date.

International Days Committee Chair and Councilman Rick Davis then presented those in attendance with a map of the proposed carnival areas for this year. One of the proposed areas is owned by USU Eastern. The university already gave permission for the space to be utilized, and with committee approval, Davis stated he would submit the proposal.

A number of other topics were discussed and the committee will meet once again in June to further the plans. The meeting is slated for June 14 at noon in the Price City Hall. 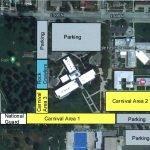