On Tuesday at 11:30 p.m., a man from Orangeville was cited for DUI and improper lane travel after losing control of his 2008 Ford F350 pickup truck. Chandler Gary Peacock, 22, was traveling northbound on Carbon Ave. when he lost control of the truck, drifted to the right, collided into a cement curb and gutter. The truck went through a chain link fence surrounding a front lawn, running into a cement driveway retaining wall. The impact launched the truck into another neighbor’s vinyl fence, tree and cement front porch, finally coming to rest upside down in the front yard of the second home.

Peacock allegedly told responding officer’s he set his vehicle on cruise control at 45 mph and subsequently fell asleep. The speed limit is 30 mph at this location.

Officers continued their investigation and have determined that alcohol was allegedly involved. Speed was likely a contributing factor. Peacock allegedly blew a .104 on scene on a portable breath test device.

Peacock was subsequently transported to Castleview Hospital. A blood sample was collected for analysis by the state crime lab. He was cited and released at the hospital to his mother.

Peacock allegedly has a history of previous alcohol offenses. 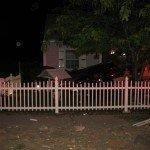 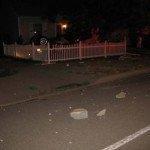 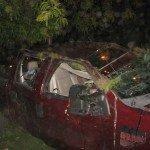 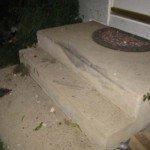