After a tough water year, most of the farmers in the town of Emery are excited to see construction start on a pipeline that marks progression in the decades long goal of sprinklers and the increased efficiency that comes with a pressurized irrigation system.

More than 20 years ago, the water users that make up the Muddy Creek Irrigation Company (MCIC) applied for funding that would bring pressurized irrigation to the farms in the Emery area. Applications were first made with the Bureau of Reclamation (BOR) during the same time period that the Ferron Canal Company received funding. The Bureau of Reclamation was willing to pay for the removal of salts from the Colorado River. Ferron Canal company was granted money while the MCIC was not. The funding was based on studies done in the 1980s on the relative creeks that tracked the tonnage of salt that was found in the creeks that would ultimately travel down the creeks and into the Colorado River. The study done on the San Rafael River was conducted during one of the wettest years on record while the study done on the Muddy Creek was done during one of the driest years on record. The result of the studies showed that the salt loading from the Muddy Creek was less than half of what was found in the San Rafael, although both watersheds drain through the salt packed Mencos Shale prevalent in all of Castle Country.

The difference in the study results allowed the northern part of Emery County and all irrigation companies that drained into the San Rafael to be eligible for funding from the Bureau of Reclamation that allowed pressurized irrigation systems to be installed, while the Muddy Creek Irrigation Company was not eligible for funding. According to the Farm Service Agency, alfalfa and forage yields have increased in the northern part of the county because of the pressurized irrigation systems, sometimes as much as two tons per acre. The increased production has been a boon to many producers in Emery County, a boon that members of the MCIC have not been able to benefit.

After many applications and searching for additional funding sources, the opportunity to install a pressurized irrigation system seemed like a “pipe dream” (pun intended). The MCIC has applied every time the BOR announced an application period and has never been approved for funding until now.

“The opportunity to receive BOR funding really is a matter of all the stars finally aligning,” said Mistie Christiansen, a MCIC board member. “When I was the mayor of the town of Emery, we started to pursue funding for a reservoir for the town of Emery and although the federal government is hesitant to fund reservoirs after Hurricane Andrew, we were able to attract attention of Senator Bennett’s office, which helped to procure funding for the desiltification structure located in the Muddy and then later the start of the current pipeline, or what we call Phase 1.”

Phase One of the pipeline was conducted in 2012 and 2013 and was funded by 595 (Army Corp of Engineers) funding as well as Water Resource loans and CIB Funding. It consists of approximately six miles of pipeline from the Muddy Creek through the cut known as the Tunnel and stops just north of town. Phase One also included a dedicated line to the town water facilities and helped to alleviate the problem of the canal freezing and eliminating the flow of water to the town in winter months.

The combined benefits of Phase One and Phase Two have allowed the cost of salt savings in the Colorado River to be low enough to qualify for Bureau of Reclamation funding after over 20 years of applications and rejections. The BOR funding will complete Phase Three. The Phase Three pipeline will run on the east side of town down towards Miller’s Canyon and help to service the producers on the east side of the town of Emery as well as directly south of the town.

The process of obtaining pressurized irrigation for the MCIC has not been without controversy. A few members of the MCIC have opposed the systems and potential for progress that it can bring. It has raised water assessments for MCIC shareholders and caused some contention in the town. The opposition has caused additional expense to MCIC and created many delays in the construction that was originally slated to begin in spring of 2018.

“The problem with the delay in construction is that producers were then ineligible for NRCS funding for 2019 because the water delivery systems were not in place in time to rank competitively,” Christiansen said. “It’s unfortunate that all members couldn’t set aside disagreements for the good of the company, but we respect their right to believe and act according to those beliefs. We are just excited to see construction finally start.”

Benefits of the project have the potential to impact many residents as well as farmers. For the average hay producer in the Emery area, the potential to increase from an average of less than 2 tons per acre to above 3.5 tons per acre will increase profit potential for many years in the future. Another benefit will be the decrease in leakage from the current canal system. Studies have been conducted that show that almost 40% of the water in the canal is lost from the head of the canal to the south of town, with much of that water seeping through the town itself. The water table in the town in most places is only approximately 20″ below ground, preventing builders from building basements without the almost constant use of pumps.

“Although not proven by a study, this past year, the water users on the Ferron Canal really should have been in the same boat that Muddy Creek users faced,” Christiansen aid. “Without the storage in Millsite, it’s amazing that many farmers in Ferron were able to harvest three crops of hay, while producers in Emery raised essentially none. In my opinion that is due to the greater efficiency in a pressurized system.”

The completion of the system could still be years away as funding for on-farm systems is dependent on the NRCS, but the majority of MCIC users are excited to see progress be made and look forward to the future.

The construction is being done by Tate Jensen and the engineering firm contracted was Jones & DeMille Engineering, Inc. 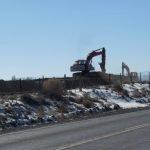 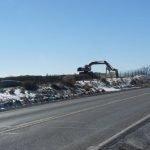