People from far and wide came to participate in a Joe’s Valley Bouldering during Thanksgiving weekend from Thursday to Sunday.

Thursday was early registration and check in from 10-2 p.m. at the Castle Dale Recreation Center. That night there was a Thanksgiving bonfire and potluck dinner at the rec center.

On Friday morning, a breakfast catered by the Garden Café was hosted. Registration and check in was at Debbie’s Unique Gifts in Castle Dale. Yoga was then taught at the Orangeville City Park by Hannah Pierce for any event goers that wanted to participate. At Food Ranch’s Spartan Den at 3 p.m. there was a #VanLife Clinic. After that were cowboy games at the Blue Sage Indoor Arena including everything from chicken chases to hide races. That night, at the old firehouse in Orangeville was a movie screening and an opening party was hosted at the rec center.

Festivities continued on Saturday with breakfast served by Food Ranch and Fatty’s Pizza & Grill at the rec center. Later, everyone met up for free group climbing sessions, which included advanced bouldering with Steven Jeffery, women’s bouldering, beginners climbing and family climbing sessions. At 6:30 p.m., Legends & Lore of Joe’s Valley was presented by Jeffery and Rich Horsley at the Museum of San Rafael in Castle Dale. Tales were told of Castle Country and its development into the climbing area it is today. A bonfire jam session was celebrated afterward. 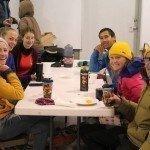 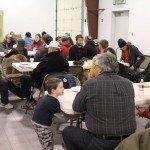 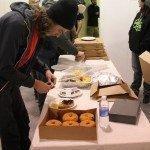