Jonathan Johnson is a current resident of Holladay, Utah. It is there that he lives with his wife of 28 years, Courtney and their five sons. Johnson is the Chairman of the Board at Overstock.com and has also made the decision to run for governor of Utah.

While at Pinnacle, Johnson confessed to the students that he wasn’t a great high school student. When he was younger he did not enjoy the learning experience of school. This changed once he started college. It was there he discovered his joy for learning and reading.

A big piece of advice that Johnson wanted to instill in the students was that reading the newspaper every day can make a big difference in your life. As a kid, Johnson started with only reading the comics. As he grew older it turned into the sports page, then the political page. After graduating from law school, he stated that he grew very interested in the business pages.

“If you want to succeed, read every day,” Johnson urged.

Johnson also spoke to the students about his work ethic and how, at a very young age, he began working. Johnson grew up in Los Angeles and for his first job out of school he worked for a photographer. The photographer he worked for took pictures for covers of magazines such as “Us” and “People,” among others.

When Johnson started at Overstock.com, he was its lawyer. He saw his boss struggling with a project one day when he had been working there for six weeks and asked if he could take it over. He became so successful with that project that his boss moved him up. Now, Johnson has over 2,000 employees and has been with the company for 14 years.

Johnson then had a brief question and answer session at the end of his presentation. A question about his political background was asked. Johnson stated he has been involved in the republican party for some time and has also been a state delegate. Johnson told a brief story about his father passing away from leukemia. When his father did not want to go through chemo again after his remission, he had requested other drugs that the doctor would not grant him because it would be extra work for the doctor. Johnson discovered that, in Colorado, there is a “right to try” law where if you’re terminally ill and normal medication doesn’t work, you can go through a process where you talk to a manufacturer and try others. Johnson worked tirelessly for months on this “right to try” law, which is now available in Utah.

Johnson was also asked about his opinion on schooling. He stated that he is not a fan of SAGE testing for several reasons, the biggest of which is that it does not affect the student’s primary grade. He would like to implement a different kind of testing that does very much affect your grade for a better end result. Johnson also wants a school system where the parents are able to be more involved in the decisions made.

Johnson’s wife, Courtney, asked Johnson to end the presentation by speaking with the students about the importance of voting. He stated that the first time he voted, he voted for Ronald Reagan. He encouraged the students to see that their vote does make an impact and their voice matters. In Utah, about 20% of the people that can, vote. The age group of 18-25 is the lowest voting group currently in Utah.

At the end of the discussion, Johnson was presented with a Pinnacle hat. 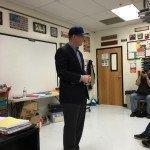 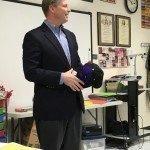