The third week of the 2020 Culture Connection season put on by Price City is in the books as the couple of Josie and Jacob Proffit performed last Thursday. The duo was preforming together several years ago when a romantic relationship began to blossom. They are now married and live in the Salt Lake area. Their vocals and harmonies dazzled all those watching the concert on Price City’s Facebook page and on ETV Channel 10.

Another great act is coming this Thursday, July 2, as Charley Jenkins is returning to Price once again. Jenkins was a finalist on NBC’s TV series Nashville Star, a country music equivalent to American Idol. Those interested can watch the free concert on the two mediums mentioned above. 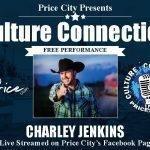