Each year, horse trainers from across the country travel to Utah for the chance to compete in the Utah Horse Trainer’s Challenge. The event takes place at the Utah Horse Expo in the Salt Lake County Equestrian Center.

Prior to the expo, approximately 20 competitors complete an interview process and a western riding/trail pattern class. The field of participants is then narrowed down to eight who will move on to compete at the horse expo. This year, Emery resident Kirk Christiansen was selected as a top eight finalist.

From there, Christiansen moved on to compete in the next phase of the challenge. He was given the chance to work with an untrained colt in a round pen for 20 minutes. While working with the animal, he explained the process and his philosophies to the crowd. Once again, the field of participants was narrowed down. Four competitors moved on to the final round of the challenge and Christiansen was one of them.

Returning to his home in Emery, Christiansen had a two-year-old colt, which he trained for 60 days. At the end of that time, he returned to the trainer’s challenge with the colt. During the expo, he had the opportunity to showcase the work he had completed with the horse.

Given 30 minutes in the arena, Christiansen demonstrated his achievements during a mini-clinic in front of an audience. The clinic included the following four categories: ranch riding, trail, cow work and freestyle. Once completed, he then fielded questions from the audience and performed a timed challenge.

During the horse trainer’s challenge, Christiansen had the opportunity to compete with three other horse trainers from Utah and Wyoming. At the end of the competition, each colt was auctioned off to a new owner.

Christiansen was raised by parents Ken and Earlene who owned a cow/calf operation. At a young age, he learned to ride horses no one else dared ride. By 14-years-old, Christiansen was starting colts for those who asked.

Today, Christiansen and his wife Mistie own and operate K&M Training and Ranch in Emery.

“We feel blessed to teach our children valuable life lessons from horseback, behind a herd of cows,” he explained. “We are raising our five kids the same way I was raised and in the same beautiful place.”

He works daily on improving his ability to listen and communicate with horses and is grateful to make a living doing what he loves. 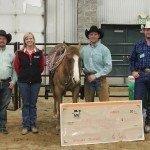 Photos courtesy of the Christiansen family. 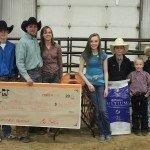 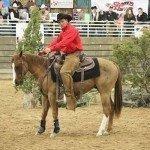