The Carbon High softball team battled Payson at home for a region matchup on Tuesday afternoon. Although the Dinos fought throughout the game, Payson’s multiple runs resulted in a 13-3 loss for Carbon.

In the first, the game proved essentially even for the teams with Payson earning two runs and Carbon grabbing one. The Dinos fell behind in the second when Payson had five runs. The third was even with both teams earning two runs.

The rest of the game tilted in Payson’s favor as the grabbed four more runs and held Carbon at zero. McKenzie Simons pitched the winning game for Payson while McKenna Sorenson battled for Carbon.

Carbon will travel to Richfield on April 22 before moving on to Park City the following day. 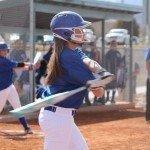