The Carbon High Lady Dino golf team opened up the season with a big win in Richfield on Tuesday. Carbon faced Payson, Richfield, Juab and North Sanpete in the region tournament.

Lady Dinos golf coach Kenji Otani explained that girls golf is played with six members on a team and is scored using the Modified Stableford Scoring System. Through this method, scores are assigned a point value. Par is equal to five points, a bogey is worth four, a double bogey is three points and so forth.

In Richfield, Carbon placed first with a convincing 140-point victory. The team total was 47 points above Richfield who placed second with a team total of 93 points. Juab finished in third with 86, followed by North Sanpete with 70 and Payson who scored 40.

Katie Felice led Carbon and the tournament with 39 points in the nine hole match. Hailey Kirkwood finished with 37 points, Braxton Gibson had 33 and Kaycee Gilson scored 31.

“It was a good win for the girls and I am very proud,” Otani stated. “I had my entire varsity team from last year return, plus we have added some good young talent. This team has big expectations and a lot is expected from them.”

Coming off the big win, Carbon traveled to Moab on Wednesday to play a match against Spanish Fork. Although the Dinos lost, it was close, decided by only three points. Spanish Fork walked away with the 130-127 win.

Felice finished with 38 points, losing medalist honors by only one shot. Gibson scored 33 points, Gilson 31 and Kirkwood finished with 25.

“Spanish is always tough, but we gave them a good run,” explained Otani. “With a couple of the girls struggling a little, on a course we have never seen, the girls ground it out and held their own against a good 4A school.”

Carbon will compete next at Juab on March 26 and will host a region tournament on April 2.

“I am very excited. We are going to have a good season,” Otani concluded. 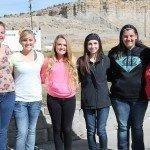 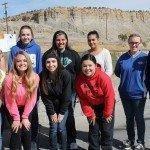