The Lady Dinos topped the charts at the state swim meet over the weekend at Brigham Young University, taking the state title in the girls’ competition. The Lady Spartans followed in fourth place. On the boys’ side, Emery took 11th, closely followed by Carbon in 12th.

Carbon and Emery had podium finishes in the 400 yard freestyle relay. Carbon’s team of Barrett, Lyman, Jespersen and Jaramillo took second with a time of 4:02.18. Emery followed in third (4:03.30) with the team of Guymon, Jensen, Carter and Hooley.

The Lady Dinos ended with 309 points to take the state championship in dominating fashion. Richfield followed in second (273) and Rowland Hall earned third (199). Emery earned 190 points in the state competition, good for fourth.

In the boys’ competition, Emery secured a third place finish in the 200 medley relay with the team of Dax Michey, Elias Morris, Asher Beagley and Matthew Hanson. The team clocked a time of 1:50.61. In the same event, Carbon’s team of Gabe Ibanez, Zac Mortensen, Matthew Torres and Camden Chamberlain took 11th with a time of 1:59.46.

In the 200 yard freestyle, Emery’s team of Morris, Minchey, Hanson and Beagley finished in 1:37.69 in the prelim but was disqualified in the final for an early take off, putting the team in eighth. Carbon finished 13th in the event (1:50.24) with teammates Spencer Tullis, Nathan Engar, Boyd Bradford and Zac Mortensen. 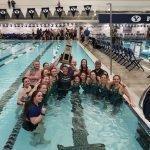 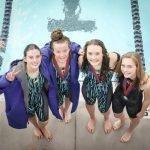 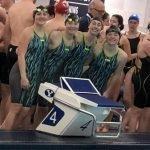 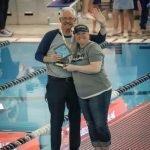 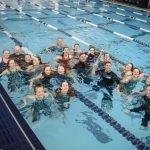