The Carbon Lady Dinos found their way to the top of the scoreboard at the Monticello Loyd’s Lake Classic, the team’s first meet of the season, on Friday while the boys’ team was just behind, earning a fourth place finish.

Senior Emily Broadbear was the first runner from Carbon to cross the finish line in the girls’ race, clocking a time of 19:53.26, good for a second place finish overall. Fellow senior Sadie Crompton was next in at 21:33.65, followed by sophomore Emma Haddock with 21:44.62. Freshman Grace Broadbear was followed by Regan Hansen across the finish line for times of 22:00.71 and 22:15.55, respectively. Sarah Ohlwiler rounded out the team with a time of 23:58.11.

Leading the Dinos in the boys’ meet, senior Drew Jones finished the race in 18:25.69. Paul Bryner was next for the boys with a time of 18:36.88 followed by Jacob Jewkes and Anthony Jones with times of 18:58.47 and 18:58.90, respectively. Other Dinos that competed in the meet included Logan Engar, James Bryner and Josh McCourt.

The Emery Spartans were also on the road for a meet last week, traveling to compete in the Manti Invitational on Wednesday, August 31.

Chase Christiansen led the Spartans in the boys’ meet, completing the race in 17:39. Tanyon Allred and McKay Meccariello were next for Emery, finishing only one second apart with times of 18:03 and 18:04, respectively. Ty Funk was not far behind, crossing the line at 18:10 followed by Griffin Livingston at 18:15.

Erin Hurst was leader in the girls’ meet, finishing first for Emery in 20:55. Emily Ussery rounded out the meet in 26:40 and Katelyn Hurst finished in 28:27.

The Spartans will next travel to North Sevier for a meet on Wednesday while the Dinos will compete in Vernal. 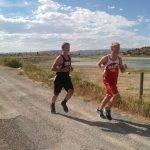 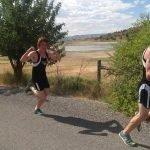 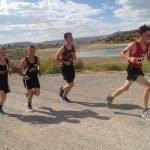