Even though Utah State Eastern collected eight hits over the College of Southern Idaho’s seven hits, they still fell 5-4 in game one over the weekend.

The Eagles got things started in the second inning with an RBI from Avery Nelson. Marisa Bowman, Skyler Lauver and Mackenzie Wright each collected two hits to lead Utah State Eastern.

Emma Marchant was in the circle, giving up seven hits and five runs while striking out three.

Eastern fell behind early and couldn’t come back in an 8-0 loss to CSI in game two. The Golden Eagles collected of all their eight runs in the second inning on five walks, a couple singles and an error.

Madie Luck got the start in the circle for Eastern, allowing two hits and four runs. Sydney Smith came in as relief to finish the game. Madie Luck led at the plate, going 2-2.

Eastern softball fell behind early in game three and couldn’t come back in an 11-3 loss. The Eagles had eight hits in the game. Kalsey Lopes and Zoey Rose each collected multiple hits, both going 2-2.

Sydney Smith took the loss, going five and two thirds innings. She allowed 14 hits and 11 runs with one strikeout.

USU Eastern dropped another game to CSI, losing 16-5 in game four. In the second inning, the Lady Eagles put up three runs on hits from Madie Luck, scoring two, and Skyler Lauver, scoring one.

In the fourth inning, Madie Luck led things off with a single, Zoey Rose had a double, followed by a walk for Marisa Bowman. Kalsey Lopes hit into a fielder’s choice, bringing in two runs. Unfortunately, the Eagles couldn’t string more runs together in the game.

Emma Marchant got the start in the circle, giving up seven runs on seven hits with two strike outs. Oakley Giacoletto and Sydney Smith combined for relief. 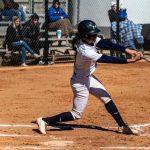