Carbon County Sheriff’s Office Sgt. Shawn Addley and Deputy Isaiah Palmer were honored at the county’s commission meeting on Wednesday evening for their recent efforts in saving the life of a local man.

Jeff Wood, Carbon County Sheriff, took time to summarize the situation and praise the men for their quick thinking to utilize past training and save the man’s life.

The event took place on Sept. 6, Wood explained. On that day, Addley and Palmer were dispatched to a home after a neighbor reported hearing a window break.

The male subject, who was known to the law enforcement officers, seemed to be reportedly acting out-of-character. Addley and Palmer walked around the home to the broken window, where they proceeded to correspond with the subject, who refused to come out.

Addley and Palmer proceeded to make entry through the back door, which was unlocked.

Palmer responded quickly, taking out his knife, cutting the belt and assisting the male subject to the ground. Once on the ground, the male subject began breathing and fighting with the two officers. Once the deputies were able to control the male, medical was dispatched to the scene and the man was transported to Castleview Hospital.

“The male subject was later admitted into the hospital due to taking an unknown amount of prescription pills and attempting to take his own life,” Addley said. “There is no doubt that the quick actions and decisions made by Deputy Isaiah Palmer and Sgt. Shawn Addley saved the life of the male subject on this night.”

Addley and Palmer were each gifted with the Medal of Meritorious Service. The medal awarded for an act which results in the saving of a life, but involves no personal danger to the employee performing the act. It may also be awarded for an act involving operational risk to an employee which is performed above and beyond the call of duty.

The duo was also treated to a loud round of applause by those in attendance and the praise of the Carbon County Commissioners. 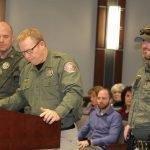 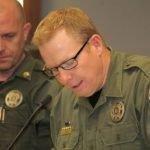 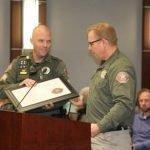 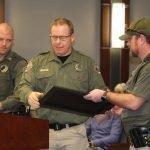 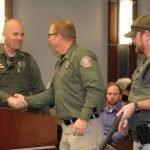 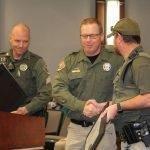