Pictured: Creekview Elementary Principal John Thomas stands with State Superintendent Sydnee Dickson as they watch students outside during her visit to his school.

The Utah State Superintendent of Schools visited Carbon School District last week on what was billed as a “listening trip” and she heard some things that she said she has been hearing around the state from teachers and administrators ever since she began doing it.

“I have heard a lot of these same things from every district I have visited,” said Dr. Sydnee Dickson, who was named to the job last June. “Many have problems with the way the state is continually changing things.”

Case in point: the recent decision by Governor Gary Herbert to not support the Utah core anymore and a consequent vote by the state school board that allows districts to “opt out” of SAGE Testing for students in grades 9-12 and replace it with the ACT test instead.

Dickson, who worked for years in Davis, Murray and Granite school districts before taking a job in the state education department in 2007, was impressed with the things happening in Carbon District. During her time in Price on Tuesday, she visited Creekview Elementary, the Castle Valley Center, Mont Harmon Middle School and Carbon High, talking with teachers and spending time conversing with students.

During her time at Carbon High, she spotted two girls working on their Chromebooks in the Grand Canyon hall and talked to them about their feelings concerning the use of the electronic devices for just about everything they do academically.

“I asked them how they would feel if we took them away and they said they would not want that to happen,” she said.

In fact, she said they seemed to have fear in their eyes that any such thing could happen.

During her visit, she watched as students worked in computer labs, she visited classrooms where math and language were being taught, and even got in on a science experiment in a classroom at the high school.

She also spent time looking at Mont Harmon’s “war room” where the data on the progress of the school hangs on the walls and where teachers meet to help them to work together as a team.

That afternoon, she held a session to talk with staff and teachers at the district office. For about an hour she took their questions and talked about things that are going on in the state and hopes she has for education progress in Utah.

Many said it was an unusual visit.

“This is the first time I ever remember seeing anybody from the state office come out to see us,” said Lee Averett, a first grade teacher at Creekview.

Based on what went on, she got what she came for. Teachers, administrators and board members all told her about their concerns and much of it had to do with non-educators meddling in the world of education, changing things they don’t understand and then leaving teachers to pick up the pieces while expecting quality work.

“People mean well,” said Stacy Basinger, the Principal at Wellington Elementary during the afternoon session. “But the state just needs to stick with something and not listen to minority voices. It seems teachers are always having to prove themselves. It’s the one percent of individuals who make it miserable.”

Between meeting with administrators and the board in the morning, the trips to the schools during the middle of the day and then the afternoon session, the things most discussed included:

He also said that the state needs to be more proactive about what is going on with standards and testing.

“I have grandkids who live in different parts of the state and they all hear different things about the core and testing,” he said. “The state board needs to get the word out so that they are not only hearing the voice of the vocal minority (who opposes the standards).”

Carbon High Principal Bruce Bean added that because of all the controversy surrounding the state core and SAGE testing, many of the kids have taken an “I don’t really care” attitude.

“But we still hold teachers accountable for how they do despite this,” he said.

“I would like to see growth assessment sustained,” said Mika Salas, the Principal at Helper Middle School. “That is especially true with those that can be rewarded for their success in a school without it actually showing (in the grading).”

“Poverty is our biggest problem,” she said. “We actually have some of our clubs organized to get donations and send food home with some students so they have something to eat over the weekend.”

Dickson said that a lot of work is being done on many of the things educators are concerned about, but there are a lot of different people trying to drive the bus, including the governor and the legislature.

“Last legislative session there were 160 bills that were drafted and debated concerning education,” she said. “They all mean well but we have asked them to stop introducing so many. However, the next session has not begun and there are already 50 something for it.”

Teachers also raised the point that many of them, while interested in wage increases, want more money for their classrooms, including for supplies. Dickson said that she is interested in a program that runs in Clark County School District in Nevada where there is a warehouse where teachers can go and pick up supplies that are donated by large companies. That way, teachers would not have to buy things for their classrooms out of their own pockets.

She also said that she is thinking about a way to start a tech foundation and would give innovation grants to school districts to work on ways to make technology work better in schools.

But most of all, she said that what needs to happen is that the positive things that come from the state need to be reinforced by those that get their benefit.

“When something we are doing or the state legislature has done is working well, let someone know it,” she said, encouraging educators to become more vocal about successes and to let political leaders know that there are things they like and want to keep. 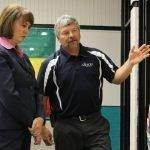 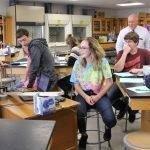 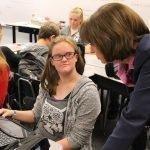