Wrestlers from eight western states competed at the brawl as representatives from Colorado, Wyoming, Idaho, California, Nevada, New Mexico, Washington and Utah filled the Sevier Valley Center, ranging in age from under six to 15.

The Green River Grapplers were represented by Darris Todd, six and under, 37 lbs, first place; Spencer Wright, 10 and under, 70 lbs, sixth; and Lucas Todd, 10 and under, 52 lbs, third place.

The Emery Allstars finished in 16th out of the 164 registered teams. 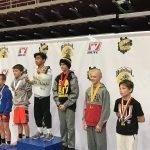