A vague item on the agenda of the recent Price City Council meeting simple read “recognition.” When Price City Police Captain Bill Barnes stood before the council and audience to speak, they were stunned by the scenario that was described.

On Aug. 7, 16-year-old Gabriella Christensen, a Helper native and junior at Carbon High School, was traveling with seven friends near Pinnacle Peak. “Take a moment and imagine the scene if you will,” Barnes shared. “A group of eight adolescents driving along in a remote area near Pinnacle Peak, having the time of their lives, enjoying each other’s company on that warm summer evening. Suddenly and without warning, the drive goes horribly wrong, the vehicle rolls, and several kids are thrown into the dirt and sagebrush.”

Barnes explained that as everyone got out of the vehicle, it burst into flame. Each person in the vehicle was injured to some extent, but locals Spencer Holyoak and Attalee Jones were in critical and life-threatening condition.

Christensen was among the injured, with injuries to her head, hand and more, which ultimately resulted in 130 stitches. In the midst of her own injuries and the chaotic scene, Christensen jumped to action, utilizing training she received from Price City Facilities Manager Tamara Gray. Before being hired in June at the Price City Desert Wave Pool, Christensen had received her Life Guard, AED, CPR and First Aid Training, earning her Red Cross certification for these proficiencies, which were displayed in full force as she worked to help her friends.

“Gabriella immediately triaged the victims,” said Barnes. “Spencer was lying on the ground choking on his own blood. Gabrielle enlisted the aid of another person on scene, placing Spencer into the ‘recovery position,’ maintaining a clear airway until medical transport arrived.”

Christensen then turned her attention to Attalee, who she discovered had no pulse. “Gabriella immediately began CPR. She continued CPR by herself for 14 minutes, in that remote location, until the first Carbon County Deputy arrived on scene. Carbon County Ambulance personnel arrived 19 minutes after the first page. Gabriella then continued assisted with the AED (automated external defibrillator) attached to Atty, stimulating her heart back to life.”

Barnes continued relaying the story of that night, praising Christensen for the work she did. “Performing CPR is physically demanding and that length of time is an eternity in a medical crisis,” Barnes said. “Atty was gone, but Gabriella refused to let that be the final chapter for Atty. Gabriella literally saved Atty’s life during those 15-20 minutes.”

According to Barnes, emergency personnel and medical professionals credit Christensen with saving Atty’s life and sustaining Spencer until first responders and medical staff could arrive on scene. Barnes also shared that everyone involved, including Holyoak and Jones, are making incredible recoveries.

“Gabriella, you are commended for your heroic, life-saving actions,” Barnes concluded. “Despite your own injuries and without regard for yourself in the face of danger, you stepped up when it counted the most. You brought triumph out of this tragedy for these individuals, their families and our community. What a bright and shining example you are for all of us. We are all so very proud of you. We thank you for your service.”

Christensen was then presented with a plaque and a long round of applause as she shook the mayor’s hand and embraced Barnes. 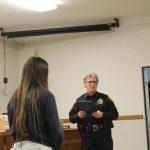 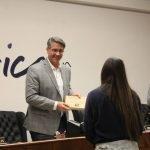 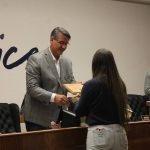 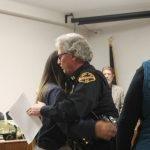 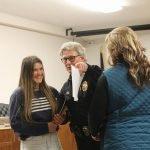