When local youngster Marissa Kouris was seven years old, her father passed away. At the time, her family was unable to purchase a headstone for his grave, which prompted Kouris to do something to fund it herself.

Kouris, now nine years old, asked her mother Luz if she could find ways to raise the money. First, she went around her neighborhood asking for donations and on the first night she received $150. She then decided that she was going to make and sell suckers for money.

Kouris sold her suckers for $1 each. However, some people were generous enough to buy a handful suckers and give her extra money. Kouris and her family spent the Thanksgiving holiday in New Mexico and sold suckers there. Through her sucker selling, she was able to raise $900 more.

Kouris’ counselor, Danette Moynier, was inspired by what she was doing and spoke to the staff at Castleview Hospital. The hospital banded together to raise money for the family. Kouris went to the hospital believing she was going to sell 25 suckers and was instead handed a card with $766 inside.

Over the course of a month, Kouris was successful in raising the money to purchase a headstone for her father.

“I just want to thank Danette and the hospital and Miranda and everyone who donated money and bought suckers,” Kouris said.

Of course, Kouris’ mother is equally as grateful and proud of her daughter for the hard work that she put forth.

“Thank you; everybody in this community is great and we’re very grateful for all of the support,” Kouris’ mother stated. 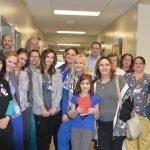 Marissa Kouris along with Castleview Hospital’s radiology department and administration team, who raised $766 for the young girl’s cause.