Also on Wednesday, the health department announced one new case of COVID-19 in Carbon County, bringing the county’s total to 25 confirmed cases since testing began. Of those, one patient has been hospitalized and 21 have recovered.

Since testing began, over 5,340 tests have been conducted in the Southeast Utah region. For case breakdowns by age and gender, see the graphs below. 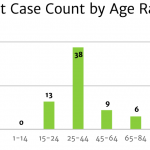 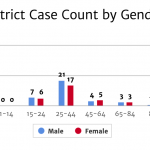