Five local high school cowboys competed in the National High School Rodeo Association (NHSRA) Finals in Gutherie, Oklahoma on July 17-23. The competitors had to finish in the top four of their respective competitions to qualify for a spot on the Utah team at nationals.

The NHSRA Finals were scheduled to be in Nebraska but were cancelled because of the pandemic regulations. As a result, the LAZY E Arena in Gutherie, Oklahoma hosted the events. Twelve performances were divided in two rounds and the top 20 were brought back to compete in the final performance.

Although Kayson and Byron did not make it to the top 20, they competed well. Korby finished first in the second round and second in the final performance and earned sixth in the average, ranking him sixth in the world. Kagen Rhodes earned an impressive ninth place finish in the light rifle shoot while Ruger Payne scored high enough for 12th in the trap shooting.

At the national competition, there were teams from Australia, Mexico, Hawaii, Alaska and nearly all of the continental United States, resulting in the “world” rankings. 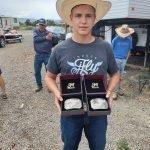 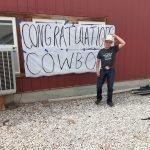