Castleview Hospital works tirelessly to ensure that the community it serves is healthy, aware and cared for. One way they strive to succeed in this endeavor is to host awareness nights. Thursday evening played host to the annual Colon Cancer Awareness night, presented by local general surgeons Kyle Jeffery M.D., Advanced Surgical Associates, and Jon Pressett M.D., FACS.

This awareness night was hosted in March due to the month being Colon Cancer Awareness Month. Those in attendance were able to enjoy a dinner as the surgical duo gave a presentation by teaching the anatomy of the colon, which is about five feet of the large intestine. The surgeons explained that there are different layers to the colon and different things can go wrong in each layer.

Common problems in the colon are bleeding, motility problems, constipation, diarrhea, polyps, diverticulitis, inflammation and cancer. Many different tests may be conducted to deduce the issue, including barium enemas, CT scans, physical exams and a colonoscopy. However, the most accurate testing has proven to be the colonoscopy.

The procedure for a colonoscopy begins with a clear liquid diet the night before and a special liquid given by a physician to clean the digestive system. During your colonoscopy, patients are sedated and not aware. Most that go through the procedure are back to their normal routine the following day.

The recommended age to begin colonoscopies is 50 with some exceptions. If there is any indicator that there is an issue with your colon, a colonoscopy will be recommended before that age. Colitis, diverticulosis, polyps and cancer can be seen during the procedure.

There are 1.4 million new cases of colon cancer a year worldwide. This cancer is the third most common in men and the second most common in women. In the United States, over 50,000 people die per year due to this cancer, making it 8% of all cancer-related deaths. However, the incidence and mortality rates are decreasing in those over 50, which is due in part to the recommended screening age.

Unfortunately, the Western diet of processed meats and high fats are not good for the risk of colon cancer. The modifiable risks include obesity, red and processed meat consumption, and tobacco and alcohol use. The non-modifiable risks include the fact that males are at a higher risk than females as well as African Americans being at a greater risk as well as genetics.

Hereditary colon cancer comes from genes that are passed from one family member to the next and is passed in such a way that it affects most family members. Colon cancer is one of the cancers that is deemed a silent killer. The cancer often has to grow large and do a lot of damage to show symptoms, which include bleeding per rectum, abdominal pain, a change in bowel habits and weakness.

To treat colon cancer, there are a multitude of options and processes. Surgery, oncology, radiation oncology, neo-adjuvant and adjuvant therapies are some of the options as well as laparoscopic and open surgery. The goal is to remove the cancer completely. Once a screening is conducted and if polyps are detected, the screenings may become more common.

The surgeons did state that most insurances will cover a colonoscopy and that either surgeon may be contacted for a consultation.

Toward the end of the presentation, the two surgeons invited the attendees to ask any questions. A large screen smart TV was also given to a lucky member of the crowd. 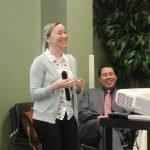 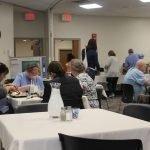 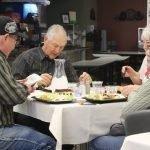 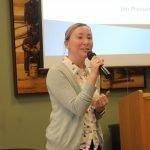 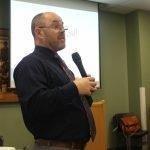