Seventh District Juvenile Court Judge Scott N. Johansen retired on Jan. 1 after a 20+ year tenure. Johansen, appointed to the position in 1992 after 13 years as an Emery County attorney, played a key role in various cases that garnered both local and national attention throughout his service.

As a judge, Johansen was able to create a reputation as both attentive and firm in his duties. In Johansen’s Judicial Performance Evaluation Commission Report for 2014, participants including court staff and professionals, attorneys and jurors who have worked with or appeared before him, described Johansen as “knowledgeable” and “intelligent” as well as “confident” and “consistent.”

The same report yielded several pages of praise. “Judge Johansen treated each participant and member of the court with the same respect and interacted in a consistent way in each case,” read the report.

Seventh District Court Judge Lyle Anderson, who was appointed as a judge after Johansen, spoke of Johansen’s friendship and help in working with cases that he could not take due to conflicts of interest. “We arranged for the Chief Justice to designate us both as both district and juvenile judges so that we could help each other,” Anderson said. Before the appointment Johansen served as the only juvenile judge at that time.

Deputy State Court Administrator Ray Wahl praised Johansen not only for his undertaking of leadership roles inside the court system and his sense of humor and proficiency, but also for the landmark changes Johansen helped to bring about in the Juvenile Justice System.

In the mid 90s, after a shooting case, Johansen was one of two who transformed the system by helping to create the Juvenile Sentencing Guidelines and also by helping to secure significant amounts of funding for the system to be used in the hiring of probation officers and in funding services for those involved in the justice system.

“I have always said about Judge Johansen that he is one of the people that really shaped how the juvenile system worked,” explained Wahl. “I admire the guy, I have for many years.”

That duty, to serve the public, has been felt by many. Members of the local community recall Johansen’s impact on their life, with multiple claiming that they would not be where they find themselves today without him.

“Three years ago I was almost a ghost,”explained one community member on Facebook. “Without Judge Johansen, I would be dead. He helped push me through drug court and my sobriety.”

“When I met Judge Johansen, it was not under the best circumstances,” expressed another individual online. “And as he sent me to jail over and over again, it wasn’t until he sent me to prison that I fully understood his reasoning. I am very grateful today for that and I understand that he wanted me to be better.”

Besides battling cancer treatments for the last eight months of his judicial service and undergoing five-month long chemotherapy treatments, Johansen continued to serve his community, family and church. He underwent a bone marrow transplant recently as he further fights Leukemia.

Johansen is a native of Castle Dale, born to high school teachers Eugene and Grace Johansen. He is married with five children and 19 grandchildren. He is also a life-long cattle rancher and enjoys riding horses with his family.

“This is a huge loss to the State of Utah Juvenile Bench as a whole and specifically to the seventh district,” Manley expressed. 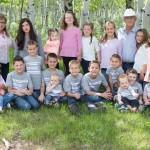