Lisa Peirce of Carbon County has a close friend and coworker living in California that has been published over 100 times in various online and print magazines. This friend is considered an expert and a source for multiple magazines.

This friend recommended Peirce to the editor of First for Women when she saw this future topic in early September. In communicating with the editor, it was discovered the Peirce had made the cut for a section of the magazine called “Easy Money.” This section features women over 40 that have hobbies that realized they could make money while encouraging other women to do the same.

Peirce spoke on making up to $1,000 per week selling Greek desserts such as baklava. When she was photographed for the piece, she donned an apron that was made locally at Deb’s Downtown Store, which is located next to Little Caesars.

Peirce’s aforementioned friend, Chantay, had previously featured the two of them in a magazine describing their friendship with a photo of them on the red carpet. Peirce works for the Oscar’s and was previously employed for the Prime Time Emmy’s. She has worked at 34 award shows and counting.

Through work, she has appeared in magazines a number of times, including InStyle and the LA Times.

She continued, “Of course, we’ve taught my adult daughter how to bake Greek and most recently, this year, my 12-year-old granddaughter has joined us baking. We only bake four times a year and when we do, it is massive baking all week for 15 hours a day, sending and delivering to over 50 people.”

Peirce stated that the process of being featured in the magazine was very official and orderly. It included signing a contract and hair and makeup artists, as well as a photographer that was sent to her home for the photoshoot.

“It was super fun and a lot of work and I am proud of it. I think my Yiayia is smiling down on me,” concluded Peirce. 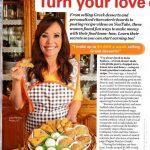 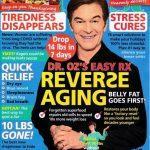 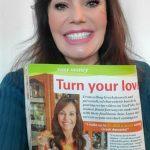