Days spent in the rain couldn’t dampen the Carbon and Emery rodeo teams’ spirits as they competed in several competitions to finish out the month of April. Highlights of matches hosted at Juab and Spanish Fork included Emery’s Austin Allred taking home a third place finish in bull riding as well as fellow Spartan Louie Ivie’s first place finish in tie-down roping at Juab on Friday.

Also at Juab, Dino Kolton Rhodes was first in the rifle shoot competition with a score of 334 points. While at Spanish Fork on Saturday, Carbon’s Jordon Pierce was third in the rifle shoot. The queen competition at Juab found Emery’s Riata Christiansen and Carbon’s Kortney Backus as queen and first attendant, respectively.

Next, May 6-7 found local rodeo teams headed north to Morgan and Heber City to compete in the high school rodeo sphere again. Friday afternoon, with rain and wind, Carbon and Emery rodeo team members scored well in several events. In team roping, Emery team member Hayden Cloward and Kycen Winn roped a fast time of 6.215 and placed first. Teammates Ty Gordon and Taylor Wilstead were fourth with a time of 13.605. Another Emery team member, Dax Hall and his partner Eli Dansie from Lehi, were seventh with a time of 17.395. A time of 14.645 in the tie-down roping garnered Gordon tenth place.

Emery’s McKoy Christiansen tied for fifth with a score of 140.5. He also placed second in the saddle bronc riding. The bull riding championship also went to an Emery team member, Allred, who scored a whopping 85 points. In team roping, Spartans Christiansen and partner Nathan Urie were sixth with a time of 7.780 and Will and Wyatt Magnuson were tenth with a time of 9.920.

Emery’s Makayla Jensen was seventh in breakaway roping with a time of 3.360, and in tie-down roping Cloward, also from Emery, was first with a fast time of 10.450. In the rifle shoot Rhodes was third with a score of 310 points while Rhodes scored 282 points and received sixth place. In the trap shoot, Casey Rich, a Dino, tied for tenth with 44 points.

This coming weekend both teams will be heading for Delta for rodeos on both Friday and Saturday. These will be the final rodeos before the state finals, which will be held June 1-4, in Heber City 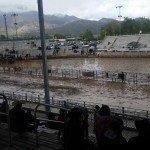 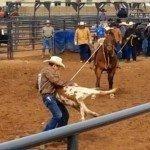 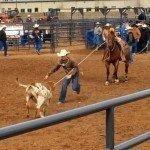