An Abbott Community Health Talk was presented at the Carbon County Senior Center during lunchtime on Wednesday afternoon.

This health talk featured Deep Brain Stimulation (DBS) therapy as a treatment for Parkinson’s Disease as well as Essential Tremor (ET) symptoms. Two of the most common neurological disorders in the United States are Parkinson’s and Essential Tremor. When the crowd was asked which they had heard of more, Parkinson’s was named.

This fact was used as a point of interest as they are two entirely different neurological disorders and Essential Tremor affects a larger number of U.S. citizens.

It is believed that Parkinson’s is more well-known due to celebrity influence on the subject, such as Michael J. Fox, who was diagnosed with Parkinson’s some time ago.

ET is a neurological condition that causes shaking in the voice, hands, arms or legs. ET is different than Parkinson’s due to being an action tremor, meaning that ET’s happen when an individual tires to engage in an activity such as brushing their hair or taking a drink of water.

Parkinson’s, on the other hand, is a much more complex disease. Parkinson’s does not only affect the resting tremors that take place when the disease is present, but also has some neuro-cognitive affects.

Both of these diseases typically begin later in adulthood, with Parkinson’s being diagnosed generally around the age of 56. Each of the diseases progress and become more prevalent as time goes on. For ET, stress, anxiety and stimulants may make the tremors worse. Treatments that are not medical that are suggested for ET is a stress-free life, increased relaxation time and avoiding stimulation.

There is only one FDA approved treatment for ET, a medication called Propranolol, which is a beta blocker that is normally used to treat high blood pressure. However, most individuals with ET find that taking a prescribed drug does not make much of a difference.

ET was originally named the Familial Tremor, meaning that there is a 50 percent chance of passing the gene on to an offspring. Each disease has been known to cause depression in the carrier as it directly affects much of day-to-day life.

Also touched on was young onset Parkinson’s (those diagnosed under 40), how Parkinson’s affects 50 percent more men than women and how it is essentially random in the way that it chooses an individual to affect.

Then described was DBS therapy. This therapy has been proven, over the past 15 years, to be an effective treatment for symptoms of Parkinson’s and ET. While the therapy continues to be studied, a latest advancement has witnessed innovations in the way that the therapy is delivered as well as exactly how it is controlled.

DBS is used to possibly control the tremors, rigidity and slowed movement that is associated with ET and particularly Parkinson’s. The therapy is conducted by using a small device that resembles a pacemaker in the skin under the chest. The device then sends signals to an area in the brain that controls movement. Once these signals are sent, relief is given to the patient by blocking the brain messages that are causing the many unsettling symptoms (tremors, stiffness, etc.) that Parkinson’s and ET create.

This free presentation was brought to the senior center by specialist Court Godfrey. 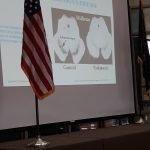 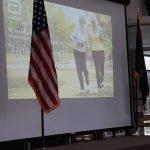 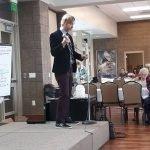 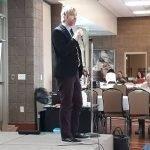 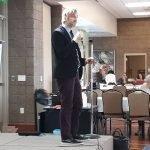