Carbon and Emery rodeo teams attended the Spikers High School Rodeo held at the Golden Spike Arena in Ogden last weekend. On Friday morning, Riata Christiansen was chosen as the queen to reign over the weekend.

In the Utah High School Rodeo Association, a competitor must finish in the top ten at a rodeo in order to qualify for the state competition. Each place earns points beginning with 10 for first place and sequential down to one point for 10th place in each of the areas. Members accumulate points until the state finals that are in June.

After the two “gos” at state, all points are added as well as average points. Only the top 15 will participate in the final rodeo. All team members are working hard as the final months of rodeo for this year approach. 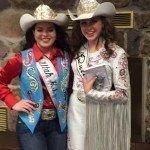