Track teams from throughout Carbon and Emery counties rounded out the 2015 season at the state championships on Friday at Brigham Young University in Provo.

For Green River, Tyrell Shumway notched one of the most impressive showings of the day in the javelin, launching a 167-10.25 first place throw, throwing over 12 feet farther than the second place competitor. Joe Serafin and Kyle Johnson both earned points for the team in the 100 meters, taking fifth and eighth, respectively. Johnson also earned points with a sixth place finish in the 800 meters. In the high jump, Jon Mendez jumped to a fifth place finish while Corbin Mecham took fourth in the shot put. In the boy’s 4×100, the Pirates also found success, notching a first place finish. Cassidee Moore was impressive for the girls, taking fourth in the 800 meters. The Pirates finished the state competition in 12th out of 22 teams.

Emery High senior Ashlyn Allred did well for the Spartans, taking second in the 100 meters and third in the 200 meters. Paytn Jeffs also earned points for the team, jumping into the only first place finish for Emery in the high jump with a 5-04 jump. Erin Hurst also did well with a fifth place finish in the 3200 meters. Emery’s girl’s medley team took a sixth place finish in the 2A competition while the boy’s ran to a ninth place finish. Ashton Dielei finished in ninth place in the boy’s 300-meter hurdles. The team capped off the day in 11th place out of 20 teams.

Carbon High sophomore Sarah Ohlwiler had an impressive showing in the long jump at the state competition, jumping into a second place finish with a 16-10.75 long jump. Ohlwiler also competed in the 100-meter hurdles, coming in ninth. Jordan Scoggins also did well at the competition, throwing a third place finish in the javelin, throwing 112-09.50. 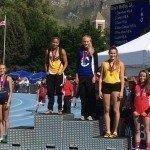 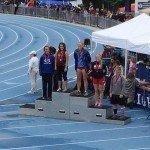