UPS Price Center Package Car Driver Coleena Burrell unknowingly made a well-known name for herself in Orangeville recently and has been recognized for her efforts.

It was stated by former Emery County Sheriff’s Office’s (ECSO) Jail Commander Dusty Butler that Burrell has always had a great personality and is very helpful. Butler credited her as cheerful, considerate and always doing more than anyone could expect.

As Orangeville is a small community, Burrell was successful in not only delivering to the ECSO, but having several residential stops on her route. Butler recalled one day in particular as he searched the surveillance footage of his home security cameras and recognized Burrell, who was witnessed interacting happily with his dogs. Following on the heels of this occurrence, Burrell called Butler to let him know she had left sizable packages at his parents’ home to make him aware his assistance would be needed.

Curious as to how Burrell would have Butler’s personal number, he came to find out that she was on a first-name basis with his mother, who is an avid online shopper and made more purchases than usual due to the COVID-19 pandemic. However, carrying the packages into the house was something else entirely for the elderly couple. Burrell made sure to take the packages to the closest door before asking if there was someone she could phone the get the packages in the home.

Upon regaling the tale to his spouse, Butler discovered that his wife also had a story of Burrell’s hard work. When his wife was unable to box a last-minute shipment at work, Burrell simply picked up the package and boxed it before sending it off on her own time. With this discovery, it was evident that Burrell leaves a trail of good deeds.

With this in mind, Butler contacted the UPS Center located in Price and spoke with the on-road supervisor, Christine Sitterud. Butler informed Sitterud that they had an amazing driver on their hands that does a great deal for their customers, much more than a driver could be expected to accomplish. Sitterud agreed, prompting the UPS Center of Price to invite all to join them in thanking Burrell for her “Customer First” outlook.

“It’s been said, everything is connected and for Coleena and her customer, that could not be more true. With her extraordinary service, Coleena builds priceless value for UPS,” said Becky Biciolis of UPS Employee Communications. 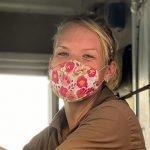 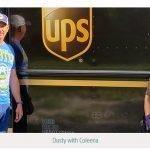