When this year’s Southeastern Utah Jr. Livestock Show was cancelled due to the COVID-19 pandemic and health regulations for a state-sponsored show, the show board and commissioners from Carbon and Emery counties organized a smaller show for local exhibitors. The event, entitled the Castle Valley Livestock Show, was hosted last week at the show barn in Ferron.

Four species of market animals were shown by the youth from both counties, including lambs, steers, hogs and goats. Jim Jensen, a retired Utah County agricultural agent, was invited to judge the show, including all classes of the different species.

The show began on Thursday morning with weigh-ins followed by the fitting and showmanship competition in each group that afternoon. On Friday morning, the judging of the animals began with market hogs. Almost 40 hogs were divided into three classes and the top animals in each class were then brought back into the show ring to be judged for the best ones of the show. Star hogs were placed in order of carcass and condition. Those exhibitors were Haiden Thayn, Kavery Killpack, Brodie Killpack, Kaicee Behling, Taleigh Price, Jersie Killpack, Evelyn Conover, Trey Stansfield, Madalynn Whimpey, Shaylee Grange, Ryleigh Whimpey, Talon Grey and Kodee Behling. The grand champion hog was exhibited by Dayton Worwood and the reserve champion by Dean Worwood.

Only three markets steers were entered into the show. Riley Westover received the grand champion honors while the reserve went to Deacon Westover. The third place steer was owned and exhibited by James Anderson. All of the market steers were raised in Carbon County.

In the market goats division, there were four classes divided to be judged by their weight. Nineteen goats were brought by into the star class competition but seven were dismissed and 12 received star class rating, including Josie Gilbert, Cassidy Gilbert, Justin Rasmussen, Jaxsten Thayn, Garrrison Staples and Deri Thatcher. Some exhibitors had more than one animal. The grand champion market goat was exhibited by Haiden Thayn and the reserve champion went to Brett Rasmussen.

The show also sponsored a rate-of-gain prize in the goat division, which was won by Deri Thatcher. The goats were weighed in May and again when they entered into the show. A daily rate of gain was calculated for the recognition. Although no auction was held this year, the lambs and goats were offered a floor price for their choosing. Hogs and steers had to find their own private treaties. 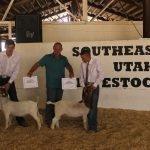 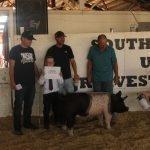 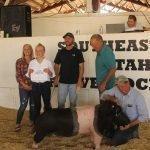 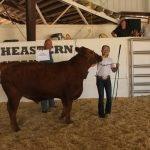 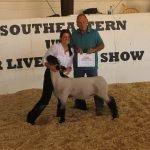 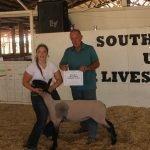 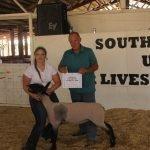 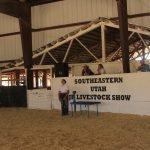 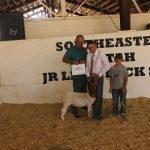 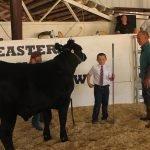