Genuine, fierce, resilient—these are words the Boys & Girls Club of Carbon County’s Youth of the Year, Fawn Powell, used to describe herself to the judges at the Utah Youth of the Year competition. Powell put these abilities on full display on Feb. 23 and 24, outshining many impressive candidates to be named runner-up.

“I am really grateful for the experience,” Powell stated. “It taught me a lot. I competed against really amazing people, and made friendships with the other candidates.”

The positive result was particularly significant to Powell and her Club, because it was the first time a member had represented Carbon County. “We really had no idea what to expect when we began the application process to have Fawn represent the Club,” said Executive Director, Josie Luke. “We know how amazing Fawn is, but it was important to us that she be able to convey that to a group of judges. During this process, I am sure that Fawn felt like we were torturing her, but she made a very positive impression on them, and represented our Club with poise.

“I was nervous all the way up, but when I actually started the competition, I met wonderful people and had a great time,” Powell revealed.

The candidates competing for the state title were required to write three essays and gather letters of recommendation before the main competition in Salt Lake. Then, on Wednesday, they delivered 3-minute speeches describing the changes impact a Boys & Girls Club had their lives. After the speeches, the candidates had interviews with five judges, who represented the higher education and business worlds.

That night the teens unwound by being treated to dinner at the Cheesecake Factory, and then playing video games at the Salt Lake City Microsoft Store. The next morning, the candidates were at the State Capitol by 7 a.m. to find out the results. Each candidate was introduced by a state Legislator, before again giving their speeches. Rep. Brad King introduced Powell, presenting her with a medallion and certificate.

The winners were announced once all of the candidates had spoken. Mohammed Hassan, the candidate from the Boys & Girls Clubs of Greater Salt Lake was named Utah Youth of the Year, with Powell as the runner-up.

Powell enjoyed her time competing, and will represent the Club until next year’s competition, when she may be allowed to compete again. “I would love to be able to go back again next year, if I am selected,” Powell said. 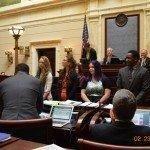